TupuToa : Walking in the light of our tupuna

Tupu is about flourishing, thriving and growing into who you were meant to be given the best conditions. Metaphorically, tupu also connects us to our ancestors (tupuna), our heritage is an integral part of our identity.

Ehara taku toa i te toa takitahi, engari he toa takitini.
My strength is not that of a single warrior, but that of many.

Toa means courage. It is the name of the strongest tree found in the Pacific, casuarina equisetifolia, used to make weapons for warfare. Toa is the name used for a warrior or a hero, and refers to bravery and boldness.

This week I had the privilege of attending the TupuToa Gala evening in Auckland.  It was a night of brown excellence – success, ambition, aspiration and sheer hard work celebrated with a packed hall of Māori and Pasifika leaders.

Have a look at what they do : https://www.tuputoa.org.nz/

The wonderful thing about the Gala night this week was seeing so many beautiful young Māori and Pasifika graduates, interns, cadets and alumni.   Hon Aupito William Sio, Minister for Pacific Peoples, spoke at the celebrity event, telling the young people not to leave their culture at their door.   He told these young people – don’t wear your culture as a necklace that can be broken or discarded; don’t wear it as a flower that can wilt and fade; wear it inside you everywhere you go.

I liked a message the Minister gave to an earlier event of young Pasifika graduates:

How do we realise our true worth? Know yourself first. Find your voice. Be confident in your own beliefs and values. I believe that knowing your family history will give you confidence as you search for new horizons. 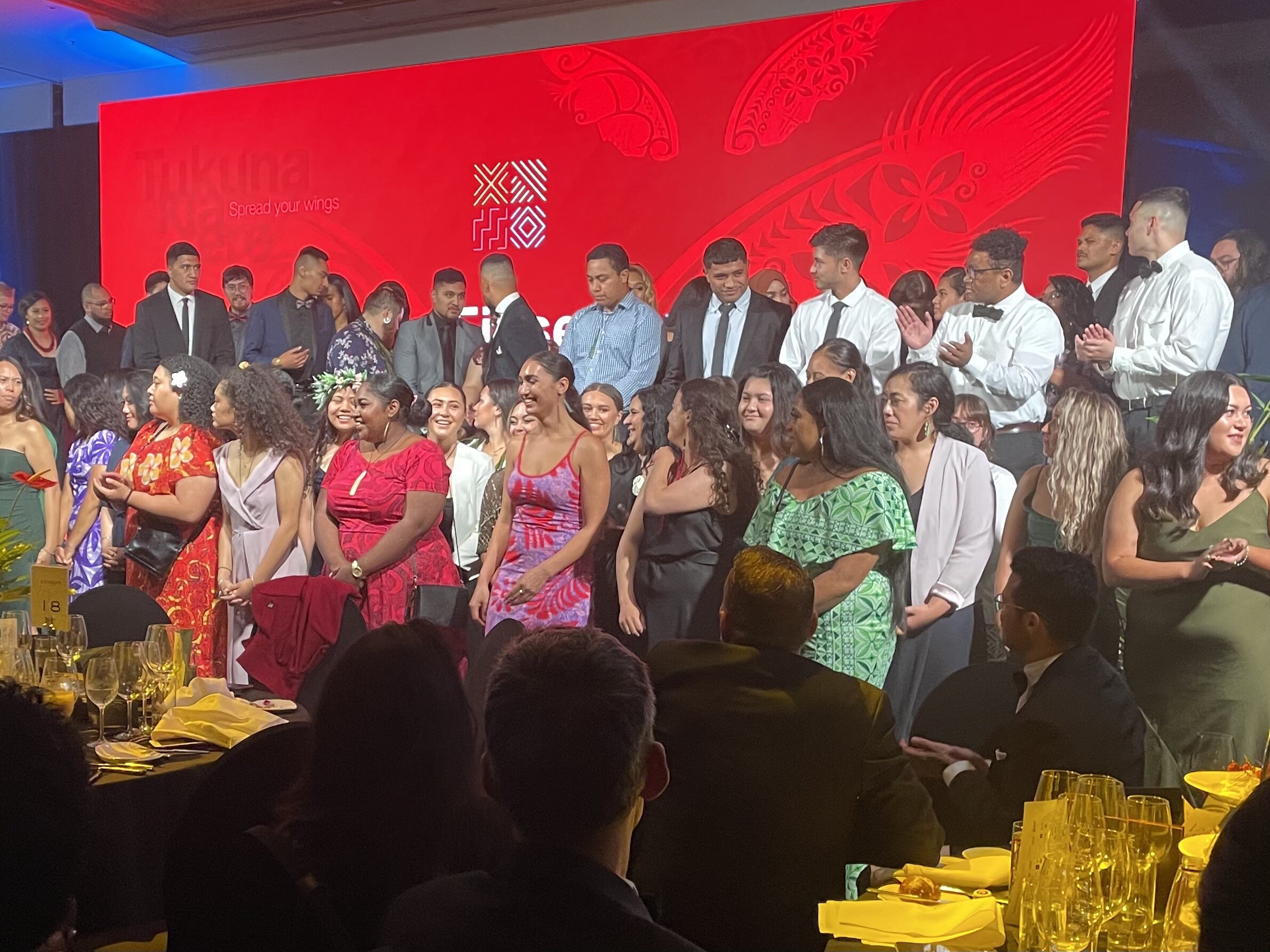 I’m excited to share that The Hive is inviting applications from passionate, curious and creative young people aged 16-20 years to join their team.

The Hive believes in the power of youth voice; that young people should be able to play an active role in shaping the decisions that affect their lives – and they’re looking for rangatahi who share that belief too.

The young people selected will attend an initial two-day creative hui between Thursday 29 April through Saturday 01 May with the Curative whānau (who have a stewardship role over The Hive and The Hivers) in Auckland. It will be an energising, inspiring experience – where each young person will learn new creative skills, meet new people, and begin to co-create the next chapter of The Hive.

Each young person who takes part in this opportunity will receive a koha to acknowledge their contribution, as well as receiving all the benefits of participating in an event that will equip them with new skills, connections and experiences.

It would be awesome if you could encourage the young people you work with to apply to be part of the next generation of The Hive. To submit an application, all they have to do is create a one-minute video that answers the question – “What is the change you’d most like to see in the world?” – then visit http://thehive.nz/recruitment and fill in the application form.

Be quick – applications close Sunday 28 February! Feel free to get in touch with The Hive if you – or they – have any questions, or would like more information.

From Tamaki Makaurau to Murihiku

While I was in Auckland with TupuToa, Navigator Co-ordinator Huata Arahanga was in Murihiku visiting managers in Bluff, Invercargill and Gore.

Huata started off with a hui with Mata Cherrington – Manager Awarua Whanau Services.   The photo below features the two of them admiring some of the community artwork in Bluff while discussing Whanau Ora Navigation kaupapa! 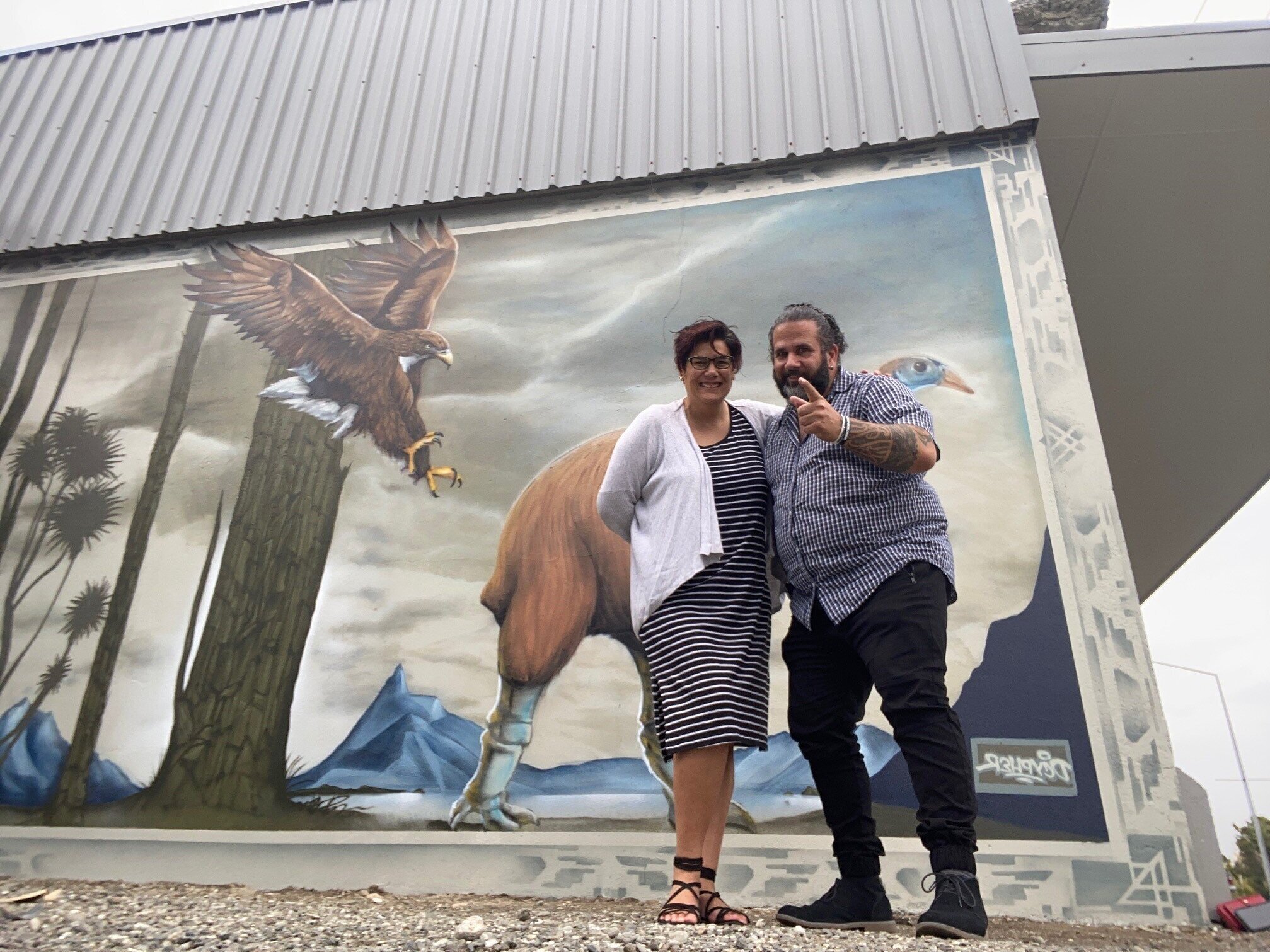 The trip South was great timing to celebrate with Janice Lee and the team at Koha Kai for an amazing donation from Rio Tinto.   Te Pūtahitanga o Te Waipounamu has been investing in Koha Kai since 2016, and we are so delighted to see wider recognition being associated with this groundbreaking whānau enterprise.

Rio Tinto has donated $90,000 to Koha Kai for the work it did in providing meals in Invercargill and Bluff during lockdown.   New Zealand Aluminum Smelter owner Rio Tinto gifted the fresh funding as part of its global Covid-19 relief package.

During the lockdown, the organisation worked with Awarua Whanau Services and Nga Kete Matauranga Pounamu to provide some 400 meals a day to vulnerable residents.  Smelter chief executive Stewart Hamilton called the organisation’s impact on the community exemplary.

Stewart and some of his staff were welcomed this week with a mihi whakatau by Te Wharekura o Arowhenua principal Gary Davis who spoke about how the smelter, the kura and Koha Kai were all connected through the ancestors of the land the smelter was built on. The garden and the meals produced by Koha Kai went a long way in sustaining some of the school’s families, he said.

An external evaluation report, released by Community Trust South on Friday, concluded that Koha Kai’s impact on trainees, whānau, school, and the wider community, was immense and multi-layered.

Koha Kai Founder and CEO Janice Lee is very grateful for the support. “It’s a much-appreciated contribution which we will use to support our vocational and training programmes through 2021 and beyond. This money enables the plans we have for updating and expanding our teaching programmes into the community. We knew what we wanted to do and achieve but weren’t sure how or when that was going to happen. Now with this contribution we have certainty for our plan for this year”.

Huata finished off his visit to sites around Murihiku with time with the team at Hokonui.   And here’s the sign to prove it was a beautiful sunny day in Gore.

Whānau Resilience involves local groups of providers working together in their regions to design services for people.   This week we had the final round-table of the Waitaha collaboration.  The event, held at He Waka Tapu, was a wonderful way to capture all that has taken place in the resilience process.

The design process takes around a year, and involves providers working together to build a picture of the needs and strengths of their region, along with testing and learning about what works for whānau to build resilience.   The services that are designed at the end of the process will then be delivered into communities.

The initiative is focused on five Pou, or service areas, which have been proven to be effective for long-term responses – such as:

A survey around Maori frameworks for addressing violence. Please distribute to your networks. https://unitec.qualtrics.com/jfe/form/SV_3gTzVdZ9S75xVMq

The kōhatu that sits on the marble plinth

Sits in silence; a tribute to tranquility

after those moments in time

when a city was swallowed

185 lives, their names now etched in the memorial

We know of as Oi Manawa

Reminding us of the thousands of tremors

The tremors that created terror and trauma

We have crafted a new vocabulary

We remember being jammed in traffic

That strangled a city in panic

A city resonating with monstrous sounds

Screaming sirens, the anguish of grief

A single flower on an orange street cone

Remembered ten years on by a garden of cupcakes

Reflecting on the Kaleidoscope of grief

We have lived through over ten years

Our thoughts are with you. Seek out your families and friends; comfort and shelter them in this moment of darkness. May God protect and watch over you so this tragedy has an ending.

It was a pleasure for our team to attend Cirko Kali Ltd gathering at the home of the two Tūmahana leads.   Jeanna Lee and Juanita are sisters that whakapapa to Rapaki.    Te Pūtahitanga o Te Waipounamu is so proud to be supporting this.

Cirko Kali offers an experience of theatre; in particular, performing the stories and journeys of Ngāi Tahu and of Maori. They also provide creative education for tamariki. Cirko Kali is a whānau initiative, that uses a kaupapa of learning, education and creativity, to integrate performance (acting) and Te Ao Maori (te reo/waiata). Cirko Kali seeks funding to support the development of several performances that will offer a glimpse into a past where generations of tīpuna and ancestors have made their homes in and around the Ngāi Tahu takiwā of Te Waipounamu. It will be enhanced by music from the Christchurch Symphony Orchestra, but ostensibly based on the Cirque techniques from Cirko Kali. The target group for these experiences and performances are Whānau Māori – especially Māori children.

Is there any better place to bring together all the people from all sorts of nationalities that have the one thing in common, that being the exchange of bilingual performance celebrating Ngāi Tahu tupuna?

The biggest project of the year will be Tūmahana: Exchange, a collaboration with the Christchurch Symphony Orchestra at the Douglas Lilburn Auditorium, Christchurch Town Hall. Devised and developed in residency at the Ron Ball Studio; Tūmahana: Exchange is a bicultural performance that weaves Māori theatre, acrobatic/aerial visual arts, Toi Māori and Tāonga Pūoro with orchestral music.

Some of our team, Kylie-Jane Phillips and Rachael Haate, had the honour this week of catching up with some of the navigators in Te Tauihu.   First off, was Te Awhina Marae in Motueka.

Wave fund recipients Tricia and Kaa Horanga say, “We hope sharing our knowledge will enable tauira mana motuhake over their Hauora and that of their whānau.”

It is always inspiring to be with a new group of students walking in the bush with a rongoā lens for the first time. The awe and excitement as tauira begin to connect and start to know the bush that has always surrounded them reiterates the relevance and importance of their initiative.

Already there have been moments of epiphany and messages from tīpuna confirming the joy of our ancestors as their uri reconnect with the things they were forced to let go. We are excited to see the magic this year will bring!

Waikawa Marae in the news

How special was it to see the new Whānau Ora navigator in Picton featured in a gathering of social and health services at Waikawa Marae, in Marlborough.

More than a dozen organisations attended a hui at the marae on Tuesday, many of the professionals meeting kanohi ki te kanohi for the first time.   The organisations represented included:

The hui was organised by Waikawa Marae co-ordinator/kairuruku Renee Love, and Whānau Ora navigator Marcia MacDonald.  MacDonald said her work involved working directly with whānau, whether they were “in crisis” or just “on a journey, with a vision”.