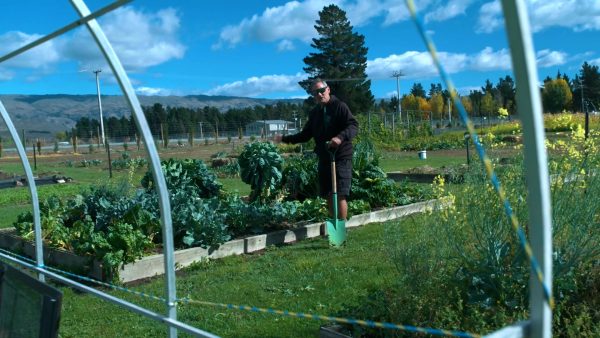 For Alva Bennett of Uruuruwhenua Health in Alexandra, the Te Pūtahitanga o Te Waipounamu Kōanga Kai initiative has provided the opportunity to watch whānau grow with their gardens.

It is, he says, one of the best projects he has been involved in and he’s seen lives change as a result of it.

Alva (Tūhoe, Te Arawa), has worked at Uruuruwhenua Health for six years, as a Whānau Ora Navigator and in a general capacity, looking after local kaumātua and the māra kai. His work is multi-faceted and in addition to encouraging whānau and kaumātua to establish gardens at their own homes, he also mentors troubled rangatahi (8-12 year-olds) and works with community members who are on probation.

“I work with people aged from 8 to 93. It’s a huge range and some of them have never been near a garden before, so for them to have that contact and to see them flourish as a result is very uplifting,” he says.

Uruuruwhenua has its own māra kai – two plots and a large glasshouse at Alexandra’s community gardens – and although it has been established for a number of years, it was just last year that they became involved with Kōanga Kai.

“We applied for funding so we could establish raised garden beds for kaumātua at their own homes. It’s a perfect initiative and the idea is building momentum fast. It means I can access funding aimed at improving the health and wellbeing of our people.”

Alva says there have been noticeable benefits to whānau and kaumātua, who show improved confidence and a growing sense of pride in their garden achievements and their ability to be increasingly self-sufficient.

“So far we’ve established around a dozen whānau gardens and that really pays off when whānau realise they no longer have to fork out $6 for one cauliflower at the supermarket –they see that same amount could buy them a dozen small cauliflower plants to nurture.”

Alva says the māra kai also gives the probationers a sense of mission and in addition to teaching them how to be self-sufficient, it builds their self-esteem.

“Probationers come and go and many have never gardened before but once they see the benefits, they usually love it. It gives them a much bigger view on life and what they can achieve. I always like to tell them, if you can nurture a garden, you can nurture a family,” he says.

The probation team has also been learning how to make māra kai planter boxes out of old timber palettes for use in kaumātua gardens; and the Uruuruwhenua gardens are also part of a weekly  community garden harvest that contributes fresh produce to the Salvation Army for distribution throughout the wider Alexandra community.

“Our māra kai is a learning centre. We encourage people of all ages to come along and help out and when they see how easy and how pleasurable it is to grow your own food, they are inspired to continue at home.

“Many of our people know their whakapapa lies in gardening and you can see them ‘light up’ when they come to the māra kai. That’s what Kōanga Kai is all about – reconnecting us to the land, to the seasons and helping us become healthy and happy. It’s helped us make a difference and that’s been overwhelming.”