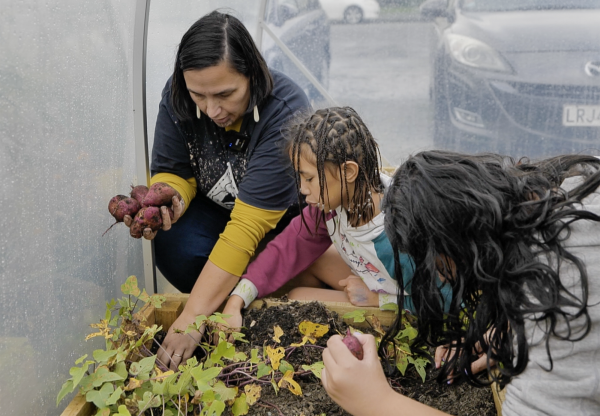 Whare Manaaki o Te Tai Poutini is place where whānau of all backgrounds can seek support in raising tamariki with a sense of ownership and validation in their own identity.

Eli Maiava created Whare Manaaki o Te Tai Poutini in Māwhera to fill a gap. It was to be a place where whānau of all backgrounds could seek support in raising tamariki with a sense of ownership and validation in their own identity.

With Whare Manaaki’s association with Te Pūtahitanga and its Kōanga Kai initiative, there’s been a huge growth in community spirit and wellbeing, and Eli (Waitaha, Ngāti Māmoe, Poutini Ngāi Tahu) has been inspired by the number of people who have overcome challenges through working māra kai.

“Kōanga Kai has provided us with the opportunity to feel connected to each other. It encourages a sense of inclusiveness and it shows many whānau that the community cares, and that we can reach out and help each other,” she says.

“Kōanga Kai is about much more than food security and self-sufficiency. It also has huge mental health benefits. There’s so much goodness in getting your hands in the dirt and connecting to Papatuanuku and Mother Nature.”

Whare Manaaki began their first māra kai in January 2021, growing a basic range of vegetables. As Kaiwhakahaere, Eli led the way with Whaea Maria Murphy and when they received funding from Kōanga Kai and Poutini Waiora in June 2021,  they were able to increase the scope of their project to include a tunnel house for seed cultivation. The team has also acquired the use of a vacant quarter-acre section next door and are about to upscale.

“As soon as people heard about our project, the interest was huge and we have been happy to offer whatever help whānau need.”

She puts interest down to the challenges of Covid lockdowns and Greymouth’s isolation and susceptibility to supply chain issues.

“Prices for fresh supermarket vegetables here can be enormous. That, coupled with job losses due to a tourism downturn, has highlighted the challenges we face around food availability here. So being able to teach whānau how to grow their own kai and become self-suffient is having a huge positive impact.”

She notes that many young people have also become involved in their whānau māra kai – “for young ones, it’s about being able to support their whānau through difficult times in a meaningful way”; and a number of kaumātua are feeling more connected to their community as whānau help each other out.”

“People are becoming more confident in their newfound skills and in their ability to be self-sufficent. That in turn builds their self-esteem and it’s been nice to see those wider, more holistic benefits conming out of the project,” Eli says.

“We don’t have a lot of community groups that focus on kai  in the Māwhera area and it can be overwhelming for whānau to know where to start with a māra kai if they haven’t grown up with gardening. Through Kōanga Kai, we’ve been able to help and support them and many have ended up with an enormous sense of self-accomplishment in their ability to care for themselves and others.

“And when you’re struggling, being able to give to others is such an important thing for wellbeing. Gardening is great for that. Many whānau have māra surplus and giving it away to others in need has been such a boost for them.

“We’re not just growing māra kai here, we’re growing our community and through Kōanga Kai we are giving whānau skills for life. It’s been a massive part of our journey.”