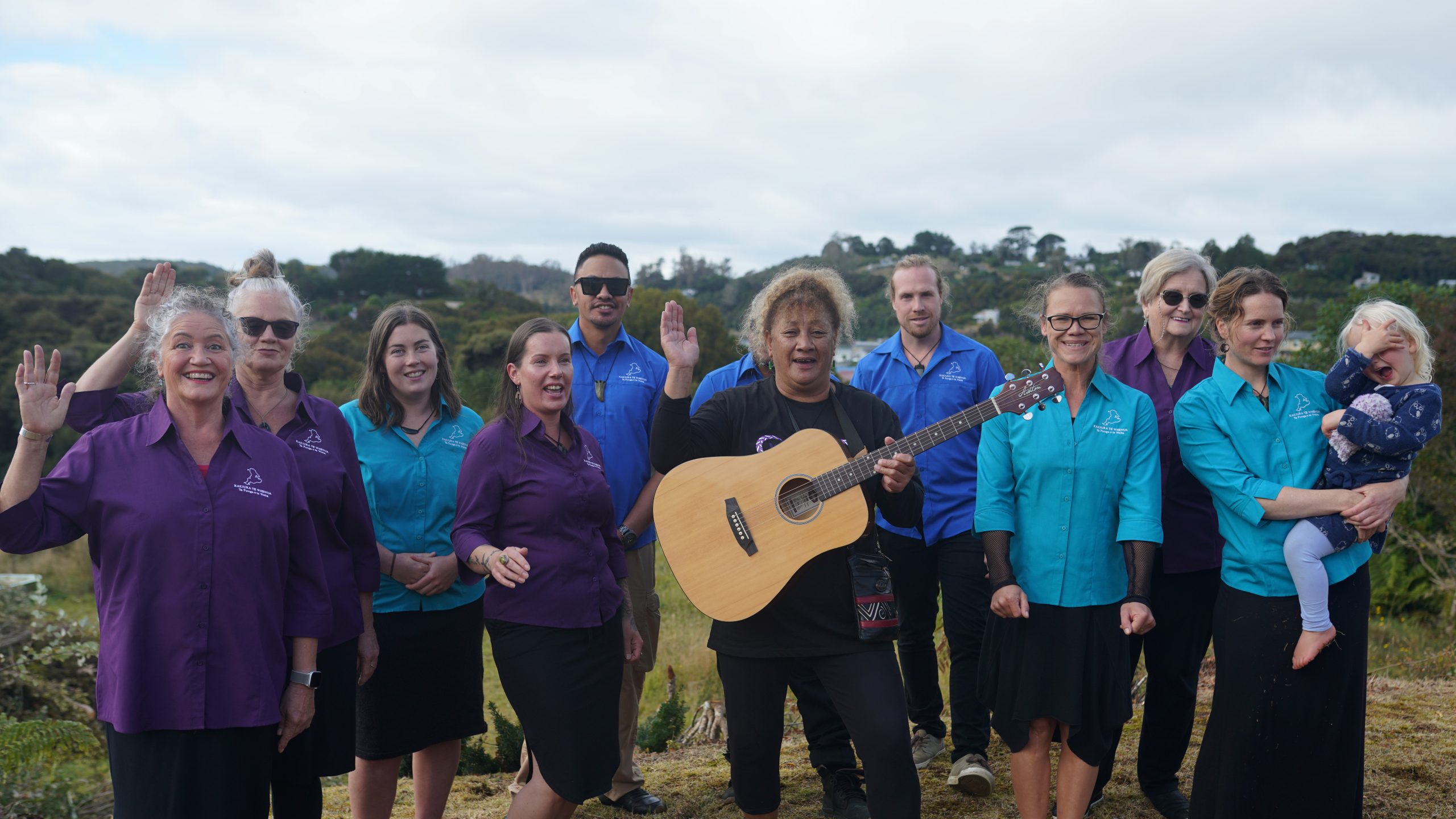 Te Kai a Te Rangatira is a kaupapa Māori initiative that is supporting Rakiura Māori to reconnect with their identity, culture and language. Pip Hakopa (Ngāti Mamoe, Waikato-Tainui, Ngāti Kahungnunu, Ngāti Tūwharetoa) was born in Huntly, raised in Awanui and lived in Murihiku for 33 years. Pip has lived a life not dissimilar to many Māori, feeling disconnected with a loss of identity in her adult life. Te Kai a Te Rangatira began as a coffee cart in 2019 at Aparima Riverton, it had served as a pop-up te reo Māori classroom, and has since evolved to include regular wānanga being held on Rakiura.

“This kaupapa creates spaces for whānau to learn our customary practices in line with te reo Māori, and then having places to put these into practice,” says Pip. The whānau are geographically disadvantaged, unable to easily attend kaupapa Māori events to observe and learn the rituals of encounter, customary practices and processes. Therefore, Te Kai a Te Rangatira has created spaces and kaupapa for the whānau and community to emulate these practices. “It has been about a cultural re-birthing for the whānau, hapū, iwi and community. Bringing our culture back into Rakiura and providing the inspiration for learning and passion. We started off as a small group in 2020, with about nine whānau attending our first wānanga.”

The opening of the Rakiura Museum, Te Puka o Te Waka, in December 2020 provided an opportunity for Pip and her students to demonstrate the value of their mahi. They put a lot of time and energy into getting everyone prepared for the pōwhiri, including a composition of their own waiata pepehā and a pātere, bringing kupu and names of the whenua back to life through song. “The whole community got involved, whānau from Murihiku  came over to teach waiata, haka and tikanga. When that day came, we showcased the intergenerational gains of our iwi in such a short time, the entire whānau were just breathtaking.”

Te Kai a Te Rangatira was the first application from Rakiura received by Te Pūtahitanga o Te Waipounamu, and the ripple effect of this kaupapa has been seen far and wide across their waters. There is a growing interest in tikanga and te reo Māori amongst the wider community, and Te Kai a Te Rangatira is equipping whānau to respond. Pip and other whānau have had the privilege of working alongside some of the stakeholders within the community, such as the Department of Conservation and the Early Learning Childhood Centre where they have promoted the use of te reo Māori in their signage. They have also created more employment opportunities within local tourism businesses for Rakiura Māori who can continue to share the traditional names and stories from around the motu.

Historically, whānau on Rakiura have felt immense sadness at the loss of language and culture, and it is meaningful to see the desire and passion to learn and understand coming from the entire community. It has been a cultural re-birthing for whānau ‘mai te pō ki te whaiao ki te ao marama’ from the world of darkness to the world of light.

Pip is very familiar with this sadness, having experienced it herself prior to her own journey into te ao Māori. In 2000 she experienced an identity crisis which almost took her life, and it was then that she started her journey of healing, reconnecting with her Māori culture and whakapapa.  Seven years later she found herself returning up north, to spend time on her whenua, with her kuia and koro.

“I got a call from my tūpuna to go home to Waikato to reclaim my whakapapa and mātauranga māori,” she says simply. During her 10 years there, Pip attended Waikato-Tainui University graduating with a Degree in Māori and Pacific Development, majoring in Te Reo Māori. She then went on to complete a post-graduate diploma in Applied Linguistics (second-language teaching), developing her own te reo Māori programme while studying. This was the beginning of many years working with people and organisations in growing cultural capacity and capabilities. Pip then responded to a call in 2017 from the Murihiku community to facilitate a te reo Māori program. It was around this time she had the privilege of reconnecting and working alongside her whānau, hapū and iwi at Ōraka-Aparima, Awarua, Waihōpai and Hokonui Papatipu Rūnanga.

Rakiura may be one of the most remote spots in Aotearoa, yet Pip can see a future there for Te Kai a Te Rangatira. She hopes that this kaupapa and others like it will continue to create opportunities on the island for many years to come.

“They’re passionate about who they are, and where they come from. They continue to learn more and more about their whakapapa. We’re growing them in this space, nurturing more whānau in succession planning so that they’re able to fulfil the roles required of them in te ao Māori in their future.”